John Brockman.- Founder and editor of Edge (I)

26 Ene John Brockman.- Founder and editor of Edge (I)

Posted at 00:00h in Ideas by Institute of Next 0 Comments

The  editor of Edge talks on What’s On Now?

JOHN BROCKMAN  himself considers a cultural impresario whose career has encompassed the avant-garde art world, science, books, software, and now the Internet. In the 60s he coined the word intermedia and pioneered intermedia kinetic environments in art, theatre, and commerce.

In 1973, he formed Brockman, Inc., the international literary and software agency specializing in serious nonfiction. He is the founder of the nonprofit Edge Foundation, Inc. and editor of Edge, the highly acclaimed website devoted to discussions of cutting edge science by many of the world’s brilliant thinkers, the leaders of what he has termed the third culture.

I met John early December while he was invited at  Kosmopolis 05 in Barcelona to discuss about the third culture . A pleasure listen to him on What’s  On Now?

Right now one of the big questions everybody is talking about in New York is the rise of Google, which is very sudden. They are a very good company, but suddenly in the last two months they have revealed an astonishing array of new initiatives. One has to do with the Google library or Google Print, there are two different things, it?s now called Google booksearch. The other with Gmail.

Gmail.- The Google mail that a lot of people are using. In order to do this you give them the right to scan your mail, but also they are scanning mail that people send to you. So that if you send me a Google mail and I respond, they have my words.

Google library.-  Where basically they want to create a universal library and scan every book ever published, supposedly to make it easy for you to search for books. That?s the reason they tell the public; what their real reasons are remain to be discovered.

I don?t write snippets.- I am the author of several books but I have also edited a couple of dozen volumes, I would say 20 of my books are in copyright and out of print.

They are going to scan them without my permission and supposedly make snippets available. Well, I don?t write snippets, I write books. I don?t write pages, I don?t write click per view, I write volumes that are intended to be read the way I presented them. 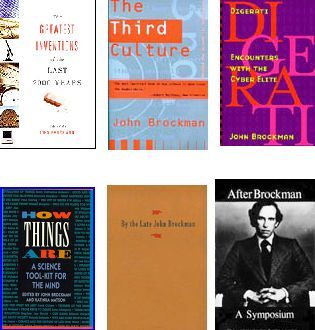 ?Turing?s Cathedral?. – George Dyson — this is Esther?s brother and Freeman?s son  — has written two essays, one a month ago called Turing?s Cathedral  and the other an essay that came out this week called The Universal Library in which he went to Google, he is friendly with the founders as I am and we think very highly of the company and very highly of them, but there?s a lot of questions, like what are they really up to?

He?s the one person who could think this deeply, maybe even more deeply than anyone at Google has thought, but what he sees is a revolution, which is a lot more important than Google itself on the stock market.

The revolution is building on the work of Turing and Von Neumman and the realisation of something they both predicted, which is moving from numerical addressing to content-based or template-based addressing, which Google and their competitors are now aiming at doing.

Sequencing books.- They?ve scanned my book, are they going to make it available for people to read on-line?

I don?t think so, that?s really illegal if they did that — I think it?s illegal anyway–, but A.I., artificial intelligence, will read these books. They are not going to tell anybody, but I assume that this is possibly what it is all about.

So they will have everyone?s books ever published, they?ll be scanning them using algorithms to read and gather information from them and then, very much like how Craig Venter is harvesting new genes from the ocean. Millions of new genes with every bucket, he is able to use a shotgun sequencing technique to assemble his snippets into a whole to get a radical picture based on very small sampling.

What is Google going to do with everybody else?s books? It remains to be seen, but do we want this universal library, say the library of Alexandria on steroids, to be under the control of a private corporation, whose fiduciary responsibility is to maximise profits for their shareholders.

In other words, it is not a question of do no evil or do the right thing, they have an obligation financially and legally to make money. So who is going to own Google in 2 years?  Is it going to be Haliburton? Or is it going to be China?

There?ll be all kinds of censorship.- If you are a writer, you have a site, you have a Google page ranking which is reputation based, so if you type in the word ?edge? which is a generic word, a website comes up because a lot of interested people click on it. What would it take to make ?Edge? go away? Just turning the knob on the algorithm slightly five degrees to the right or to the left? Who controls that? We don?t know, it?s all very secret, but these are important questions.

The thing that has to be asked is this: no-one ever voted for electricity, no-one has ever voted for the Internet, nobody has ever voted for Xerox, penicillin, the birth-control pill. These are the things that change our lives. The laws we have now were written in a pre-digital world, they don?t apply. So are these initiatives just going to go forward without anybody thinking them through, without any democratic elective feedback? It is very interesting.

Sorry, the comment form is closed at this time.